More and more Internet properties rely on mobile traffic. For example, Facebook’s financial results for the third quarter of 2013 showed 49% of advertising revenue was captured from mobile traffic.

Previously, based on a March 2013 survey, we found that our U.S. and U.K.-based customers projected increased mobile traffic from the previous year. In order to compare those findings after six months, DiscountASP.NET conducted a worldwide survey in October 2013 and received 944 responses. To limit the range of samples for this post, we only look at our U.S.-based customers. We had 644 responses from the U.S. 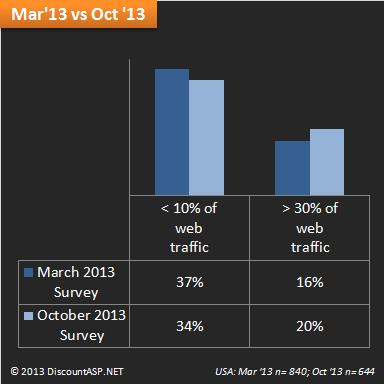 Within the span of 6 months we find that our U.S.-based customers project more mobile traffic to their websites for 2014. Based on the October 2013 survey, 20% of our U.S. customers stated that over 30% of their web site traffic will come from mobile devices, compared to their projection of 16% from the March 2013 survey.

When we looked at the data by segmenting our U.S. customers by the age of their hosting account, we found that our newer customers projected higher levels of mobile traffic to their sites than our older customers. The October 2013 survey results show that 27% of the customers who signed up in 2011 and later believed that over 30% of their web site traffic will come from mobile devices in 2014, compared to 16% of customers who signed up an account with us before 2011. This trend is similar to a previous study where we found our younger customers focusing more time on developing mobile phone apps compared to our older customers. 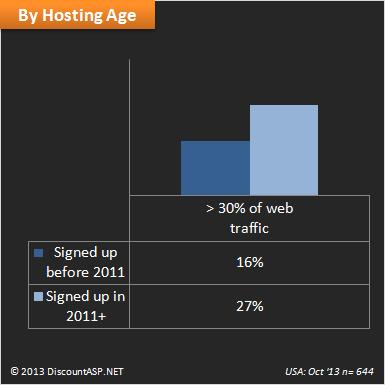 In general, mobile traffic is on the rise as mobile devices proliferate throughout the globe. Once again, all web site owners will need to put together a mobile strategy for years to come.