The mobile web is increasingly becoming an important part of the overall strategy of acquiring Internet traffic for a web site. Recent studies by pingdom.com found that the mobile share of global Internet traffic is now over 13%.

In addition, a highly cited study by Walker Sands showed that over 23% of the total website visits in the US and Canada in December 2012 were coming from mobile devices. During the WebFest Conference in early February 2013, Oversee.net announced that an average of 18% of all traffic to its network properties in 2012 were from mobile devices. Tech watchers have predicted that mobile traffic could reach over 30% by the end of 2013.

To get some insight into how our customers perceive these new trends, DiscountASP.NET conducted a worldwide survey and asked questions regarding their mobile web traffic. We received 1,308 responses from around the world. Here we’ll limit the range of samples by looking at data from our U.S.-based and U.K.-based customers. We had 840 responses from the U.S and 102 responses from the U.K. 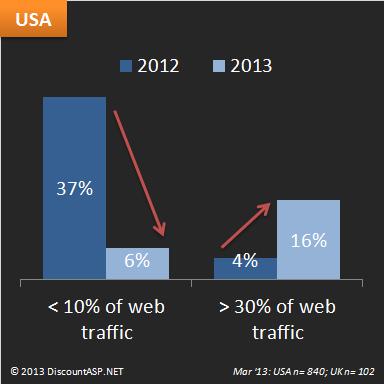 But this sentiment drops significantly when we asked them to project their mobile traffic for 2013, as only 6% of our customers in the US believe that less than 10% of their web site traffic will come from mobile devices in 2013. Of all the US respondents, only 4% stated that over 30% of their web site traffic came from mobile devices in 2012, but their projection quadrupled to 16% in 2013. 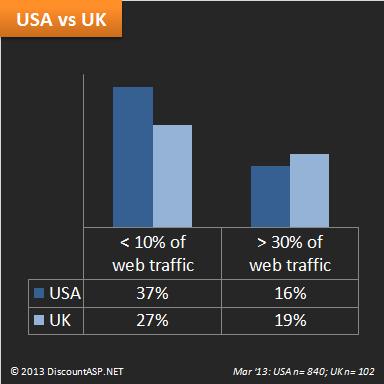 When comparing the results of the same mobile traffic questions between the US and UK customers, 27% of the UK of customers believed that less than 10% of their web site traffic came from mobile devices in 2012. In terms of percentage, more UK-based customers project that over 30% of their web site traffic will come from mobile devices in 2013 than the US-based customers, 19% versus 16%, respectively.

It’s interesting to see these differences between regions as they are partly due to regional differences in the adoption of mobile technology. But for all web site owners, it is time to think about putting in place a mobile strategy. As usage of mobile devices grow year after year, more and more users will visit your site from mobile devices.

One thought on “Mobile web traffic among DiscountASP.NET customers”