And another year goes by… Happy New Year!

Q4 2013 was a busy time for us. Microsoft released their Windows 2012 R2 update along with Visual Studio 2013 and updates for ASP.NET and ASP.NET MVC.  We have always done our best to keep up with all the new Microsoft technology releases, so we quickly refreshed to Windows Server 2012 R2 for our hosting platform and launched support for ASP.NET 4.5.1 and ASP.NET MVC 5. Our hosting platform is Visual Studio 2013 ready!

Along with Visual Studio 2013, Microsoft released Team Foundation Server 2013. So we launched support for shared TFS 2013 hosting in our US and UK-based data centers. TFS 2013 adds more collaboration tools like Team Rooms, has enhancements to improve productivity like un-dockable details panes,  and includes GIT integration. We posted a Getting Started with TFS 2013 Hosting video.

In May we unveiled Snapp – a .NET platform-as-a-service solution that comes with a staging and production site for each application. Snapp is built on top of Windows Azure Pack – the same technology that runs Windows Azure. The Snapp service is currently in free beta mode so interested developers can sign up and test it out and provide us with feedback. Over the year we’ve launched some enhancements including hostname support, scheduled deployment, an asynchronous task notification alert system, and enhancements to the exception management system. 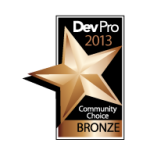 With huge companies like Amazon moving into the hosting space, smaller independent companies like DiscountASP.NET find it increasingly more challenging to fight for mindshare. But despite the entry of the giants, for the fourth year in a row, we’ve placed in the top 3 for the award for Best Hosting Services in DevPro’s Community Choice poll. Thanks for your votes, and for your continuing support that allows us to remain independent, agile and responsive to your needs.

We expanded our activity on the Google+ platform in 2013, hosting a few Google Hangouts and going live with our own Michael Ossou conducting some great Google-on-air interviews with top-notch developers like Chander Dhall, Scott Allen and Dan Wahlin. Add us to your circles! If you aren’t on Google+, you really ought to check it out.

We partnered with TeamExpand to offer a fully-managed hosted TFS Timesheets solution. TeamExpand’s TX Chrono application installs on top of TFS  and is a web-based tool that allows developers to submit Timesheets for project work items and provides project managers with the ability to review and approve Timesheets.

We launched SQL 2012 Reporting Services as a new add-on option for our hosting customers.

Some of you asked if it was possible to use just the build portion our TFS service. The idea (and challenge) intrigued us, so we created and launched a standalone TFS Build-as-a-Service solution. If you host your TFS repositories on-premises or at other TFS hosting services but require a customized TFS Build solution, our Build-as-a-Service is right up your alley. The Build solution is fully-managed and customizable. We can support FTP or WebDAV access and install code signing certificates and customized test frameworks. You can install Web Deploy and deploy straight from the build server. We can support complex build solutions that require multiple build servers and multiple build agents – in other words, all the flexibility of a custom build environment with none of the maintenance headaches.

We truly enjoy helping the development community, so as you may know, we offer a lot of free beta hosting programs.  This year we worked with Microsoft to offer free hosting sandboxes to allow developers to test out new technologies like ASP.NET 4.5.1 on Windows 2012 R2 and Web Matrix 3. We will continue our tradition of offering beta hosting via our labs program whenever we can.

If it looks like we were busy in 2013, we were! But we have something up our sleeve for 2014 that we think a lot of you will enjoy, and we’re not going to make you wait too long to see what it is. Stay tuned! Things are about to get interesting…