We started to collect data regarding the social media usage among DiscountASP.NET users in our surveys conducted in March 2012 and continue up to the latest survey in October 2013.

We thought it would be interesting to compare those four surveys from 2012 to 2013 on which social media services our customers are using and see the trends.

We asked our users to rate how active they were in using Twitter, LinkedIn and Facebook and to select from four options, including “Do Not Use,” “Set up account, but never use,” “Use occasionally,” and “Active User.” Similar to our previous post that was published in December last year, we only show the percentage of the “Active Users” for each of the social media services. 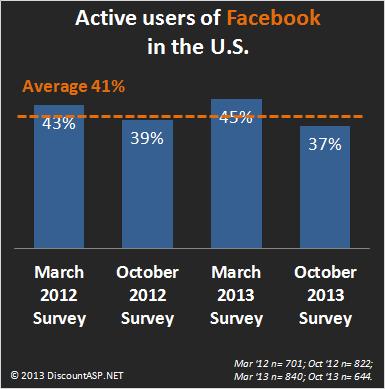 The results from the four surveys showed that Facebook continues to be the top social media site actively used by our customers in the US. Based on the four surveys, an average of 41% of our clients are active users of Facebook. In the latest survey in October 2013 the percentage was at 37%, or a drop of 4% from the average level. If we compare this with our March 2013 Survey, we see a big drop of 8%. 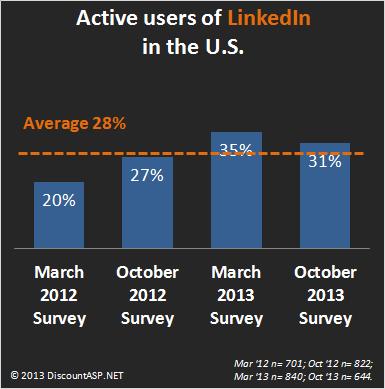 LinkedIn continues to hold the second spot averaging 28% of our clients being active users across the four surveys.  We see that LinkedIn usage has continued to increase among our clients from the first survey back in March 2012, hitting the highest level of 35% in March 2013, and then dropping 4% to 31% in the latest survey. 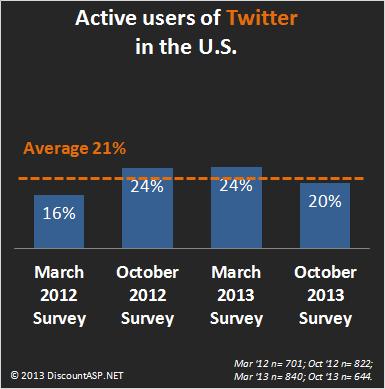 Twitter captured the third position averaging 21% of our clients being active users across the four surveys. Similar to LinkedIn, Twitter usage continued to increase from 16% to 24% over 2012 and remained at a steady level in March 2013. But once again, we see a 4% drop in our most recent survey.

The data spanning four surveys show some interesting results on how the usage of these social media sites has evolved within the past two years. In summary, the latest survey in October 2013 showed that there has been a drop in active use of social media services like Facebook, LinkedIn and Twitter.

While we cannot state the exact reason we are seeing this drop, it is interesting to note that this could be an instance of social media fatigue as social media experts have recently discussed [1, 2]. Another explanation may be in the rise of social media newcomers that are taking away some market share of “attention” from traditional social media services.

In the next survey we may look into other emerging social media providers from different regions and adding those into our survey questions.