We explored the social media usage among DiscountASP.NET users in our last two surveys conducted in March and October of this year.  We thought it would be interesting to check out trends on which social media services our customers are using.

We received 701 responses in the March survey and 822 responses in the October survey from our U.S. based customers. In both surveys, we asked our users to rate how active they were in using Google Plus, Twitter, LinkedIn and Facebook and to select from four options, including “Do Not Use,” “Set up account, but never use,” “Use occasionally,” and “Active User.”  Similar to our previous post, we only show the percentage of the “Active Users” for each of the social media services.

Both our March and October results showed that Facebook remains the top social media site actively used among our customers.  In the October survey 39% of our clients indicated they were active users of Facebook, compared to March which was at 43%, a drop of 4%.  We don’t know the reason for this drop; however, this may be an interesting question to ask in our next survey.

LinkedIn captured the second spot with 27% of our clients using the social media services for enhancing their business and personal development in our October survey.  Overall, LinkedIn usage increased among our clients as compared to March which was at a 20% level resulting in an increase of 7% within the past six months. 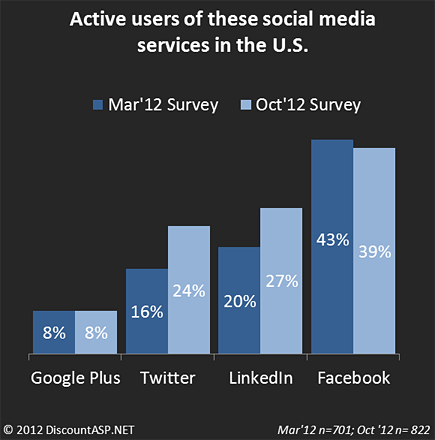 In summary, more DiscountASP.NET customers are using LinkedIn and Twitter in recent months, while Facebook experienced a bit of a drop in usage.  Even with all the buzz, Google Plus remains in the last spot among the four social media services.

By comparing the two surveys, we see some interesting results on how the usage of these social media sites has changed within the past several months. We’ll keep an eye out on the future trends as it should be getting more interesting as Twitter prepares to launch their photo app, with Facebook acquiring Instagram, and the relative newcomer Pinterest attracting a large number of new users.  In the next survey we may add those emerging sites into our survey questions.