We previously published a couple of posts regarding social media usage among our customers. In our latest survey, we asked our customers what they thought was the most effective social media platform to reach their audience.

You can probably guess the two social media networks that stood out – Facebook and Twitter. This result is in line with their popularity in terms of total active users. As of March 2013, Facebook had about 1.11 billion monthly active users and 665 million daily active users. Twitter has over 500 million registered users, but only one-third are active users.

Our March 2013 survey received 1,308 responses from around the world and 54% of our customers told us that Facebook was the most effective social media platform. But what is interesting is that the percentage varies from region to region as broken down in the plot below.

Asia had the highest percentage at 74% while the UK had the lowest with 40%. Users in the US selected Facebook just slightly above the average level at 58%. 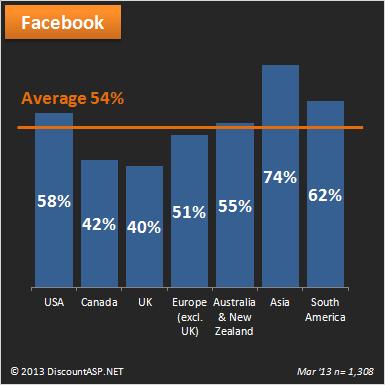 Twitter was the second most chosen social media platform, averaging 20%. Similar to Facebook, the percentage varied from region to region as broken down in the figure below.

Users in the UK had the highest percentage with 35%, while Asia had the lowest with 7%. Only 15% of users in the US selected Twitter which was below the global average level. 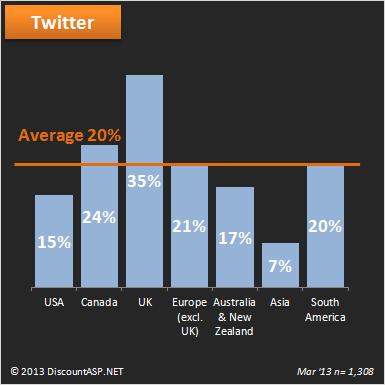 While other social media platforms are playing catch up, Facebook dominates in its mindshare among our customers.

We’ll continue to monitor how social media usage trends change with future surveys. But one takeaway is that if you are trying to reach an audience in a particular geographical region you may want to use different social media platforms.