If you’re like a lot of people you might ask, “What’s in it for me?” Well, if you play your cards right, the answer could be; lunch!

As you may be aware, we were at SoCal Code Camp on Saturday. The time between sessions can be a madhouse, with a lot of people stopping by the table and asking questions, shooting the breeze or just lurking around the margins and stuffing free pens and frisbees into their pockets. But during the sessions the traffic around the sponsor’s tables drops off and you can find yourself with a little time to kill.

Takeshi, Mark and I were behind the DiscountASP.NET table, and we realized that we were getting hungry. So I pulled out my phone and tweeted, “Free hosting for anyone who can bring us a pizza! 😉 #socalcodecamp” 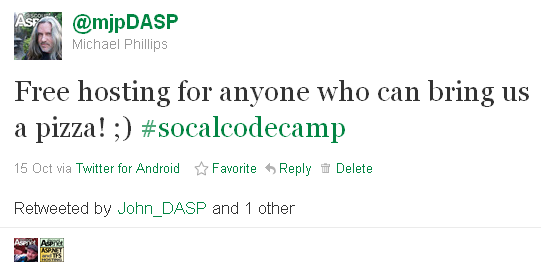 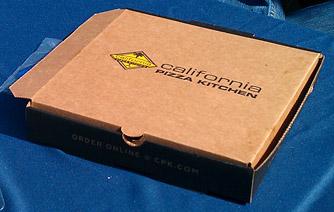 I was kidding, of course, and we had a laugh and forgot about it. Then, less than an hour later, guess what showed up at the table? Courtesy of a DiscountASP.NET customer (who didn’t want his name used here in the blog – “Just call me Dexter”), a stack of pizzas!

It was one of those, “seriously?” moments, and a pretty convincing testament to the power of Twitter. Or hunger, or cheese or something.

One thought on “So Cal Code Camp: The amazing pizza tweet”