We sponsored and made an appearance at So Cal Code Camp again this year. Code camps are great places to learn and network and even walk away with some cool stuff courtesy of vendors like us, who want you to walk around with a nice DiscountASP.NET branded travel mug. 😉

There are three different code camps in Southern California, and code camps in many other cities around the country. If you search “code camp your city,” the odds are pretty good that you will find one near you. The odds are also pretty good that we’re a sponsor of your local code camp. We’re pretty big on the concept, as you probably know if you read this blog from time to time. 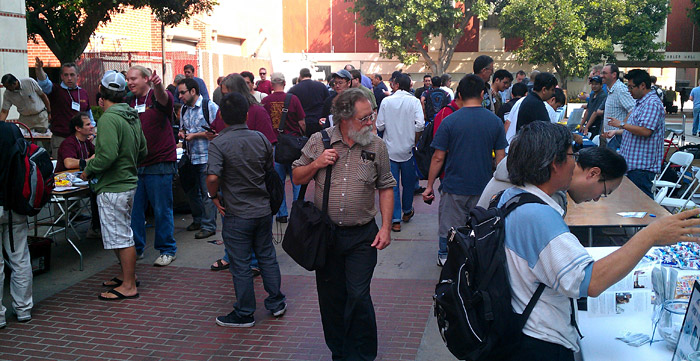 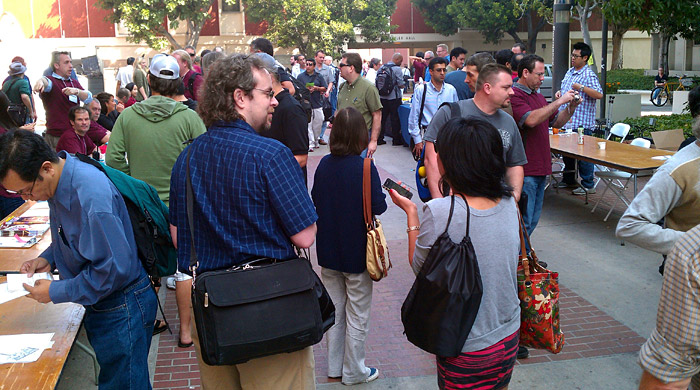 This year we tried something new at So Cal Code Camp and spoke at two sessions. Joe Jun did a “Getting started with TFS” session in the morning that was plagued with technical difficulties (despite a hardware assist from Art Villa), but Joe winged it artfully and provided a good amount of information for the attendees. Since he was unable to give the full presentation, those who attended also received the bonus of a free TFS account, so I think everyone was pleased in the end.

Then in the afternoon, Takeshi, Ray and myself did a “Hosting Q&A” session that was interesting and a lot of fun. You can count on developers to ask good questions, and they did. A lot of interest in Azure and Amazon cloud storage, and questions about how to use those services as CDNs in conjunction with traditional hosting, and how to decide which platform is best for hosting a specific project (the answer, by the way, depends on a lot of different factors – but for the vast majority of projects, a DiscountASP.NET account is going to serve you quite well (not that it should surprise you to hear me say that!)).

The rest of the day was spent manning the table and talking to a whole lot of curious coders. It was a good sized crowd and we enjoyed meeting everyone who stopped by to chat.

In the next day or two we’ll post more on the So Cal Code Camp, including the story of the pizza tweet. You don’t want to miss that one.

2 thoughts on “So Cal Code Camp”