On August 1st, 2012, Steven Sinofsky, president of Windows and Windows Live Division, announced that the Windows 8 operating system (O/S) will be released to the general public on October 26, 2012.  The O/S was first demonstrated in late May 2011 at the D9 Conference in Rancho Palos Verdes, California.

During the first three weeks of October, before the official launch of Windows 8, DiscountASP.NET conducted a survey asking our customers whether they will upgrade to or purchase the new O/S.  We received 1,265 responses from around the world.  In the survey, we asked our customers to answer “yes” or “no” to the question regarding Windows 8. 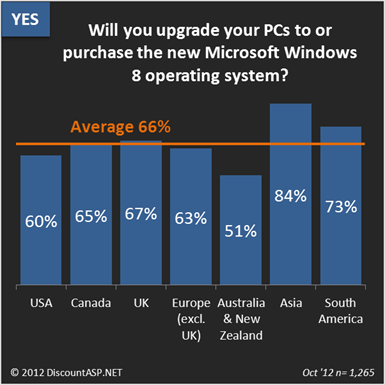 After getting a response to the Windows 8 question, we continued to ask several follow up questions.  In this post we show some of these findings.  In order to get a quick analysis, we limited the scope by pulling data from only our U.S.-based customers.

We asked our customers which mobile phone they used and the customers who answered “yes” to the Windows 8 upgrade were using the iPhone at 47% and Android 53%.  These percentages are almost identical to other third party published data for the U.S. (i.e., comScore). 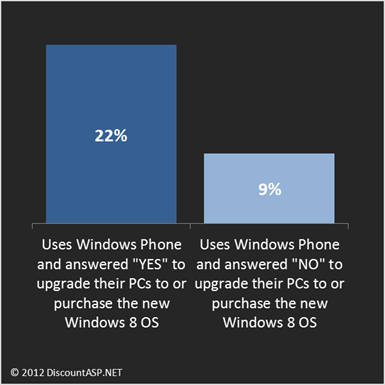 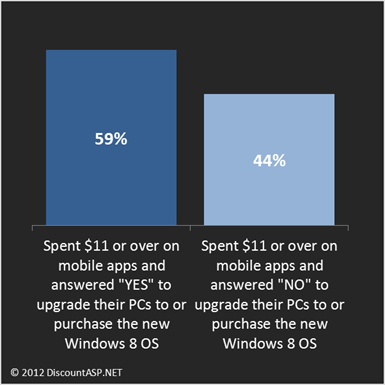 In summary, 2 out of 3 DiscountASP.NET customers appear to be interested in upgrading or purchasing the new Windows 8 O/S.  This is a significantly higher percentage than recent data provided by WSJ that indicates that only about 33% of corporate users are expected to move to the new O/S.

In terms of mobile phone usage, many customers who have already invested in Windows Phone will continue to be loyal to Microsoft’s new Windows 8 platform. In terms of application buying habits, it seems that customers who are willing to spend money on mobile apps are also willing move to Windows 8.

This is great news for Windows 8, but Microsoft will need to work on getting many more apps onto the Windows 8 marketplace.

We will look into asking our customers if they are using Windows 8 sometime after the official launch to see how many of those who said they were interested in Windows 8 are actually using the new O/S.

2 thoughts on “Will DiscountASP.NET customers upgrade to Windows 8?”