Steven Sinofsky, president of Windows and Windows Live Division, unveiled the Windows 8 operating system (OS) at the D9 Conference in Rancho Palos Verdes, California, almost one year ago. (1)  Windows 8 was a re-imagined Windows OS focused on touch and a Metro-style platform option similar to that used in Microsoft’s mobile operating system for Windows Phone 7.  Windows 8 is geared toward a new generation of devices with touch-only screens from a small size such as a phone to a large size such as a flat screen monitor or television.  Many of these devices may not require a keyboard or mouse.

On September 13, 2011, several different pieces of hardware running Windows 8 were showcased during the Build Conference in Anaheim, California. (2)  Then, on December 6, 2011 at a Windows Store Preview event in San Francisco, the Windows team encouraged developers to begin developing Metro style apps with an 80% revenue share for apps sold thru the marketplace. (3) Windows 8 continues to gain attention and during the Mobile World Congress in Barcelona in February 2012, the Windows team announced the release of Windows 8 Consumer Preview. (4)

At DiscountASP.NET, we asked our users whether they intended to develop Metro-style apps. We used the same question and answer choices for the past two surveys, conducted in October 2011 and March 2012.  Here we discuss some of our findings. 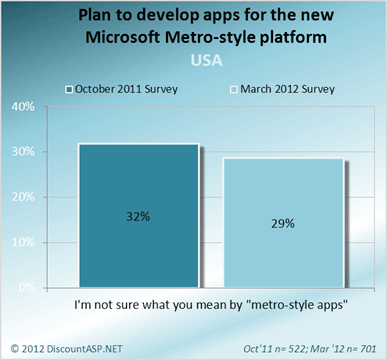 Chart 1 shows our users’ awareness of the Metro-style platform within the 5 month span between the two surveys.  It appears that Microsoft’s activities around Windows 8 and their push to encourage developers to develop Metro-style apps is increasing awareness of the Metro platform. In October 2011, 32% of survey respondents in the U.S. were not sure what a Metro-style app was.  In March 2012, the percentage decreased to 29%, so there was a 3% increase in awareness.

Chart 2 shows that the percentage of DiscountASP.NET users who are not planning to develop Metro-style applications remained at a relatively steady level. 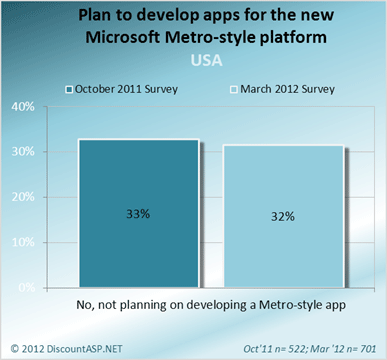 Chart 3 shows that in October of 2011, 7% of DiscountASP.NET users had already started developing Metro-style apps using the available betas.  The percentage increased to 9% 5 months later.  Our March 2012 survey showed that our users who were planning to develop Metro-style apps within the next 3 months doubled compared to our previous survey in October 2011. 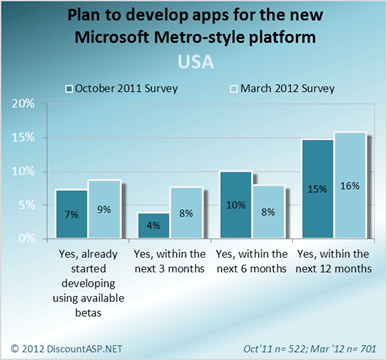 In general, there is increased interest among our users in developing Metro-style apps.  We believe that in our next survey these percentages will increase, as the Windows team is planning to release more updates to Windows 8, as well as tools to help build Metro apps. As we approach the launch of Windows 8 later this year, we will continue to monitor our users’ interest in the new platform.