Both Microsoft CEO Steve Ballmer and Windows Division President Steven Sinofsky were present on a Hollywood stage to showcase a new tablet computer unveiled as Microsoft Surface in Los Angeles on June 18, 2012. An invitation to the event was sent out to the journalists with very short notice.

While many considered the Surface strategy as Microsoft’s answer to the iPad, the pre-order of the device started last week with the basic Windows RT model at $499 per unit.

Previously I blogged about whether our customers would upgrade to the Windows 8 O/S, and for this post we look at our customers interest in purchasing the Microsoft Surface which will officially launch tomorrow, Friday, October 26, 2012.

In a recent customer survey we asked our clients to answer “yes” or “no” to their intention to purchase the Surface Tablet. We received 1,265 responses from around the world and 822 of the responses were from the U.S.  Just as in my previous post, we’ll limit the range of samples by pulling data from only our U.S.-based customers.

The survey results show that 51% of our customers in the US will purchase a Microsoft Surface. 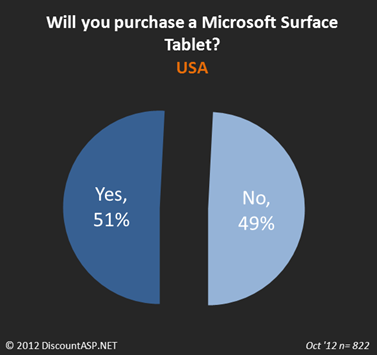 In my previous post we observed that 60% of our U.S.-based customers indicated that they would upgrade or purchase the Windows 8 O/S (see plot below). It appears that a large percent may get Windows 8 through the purchase of the Microsoft Surface. 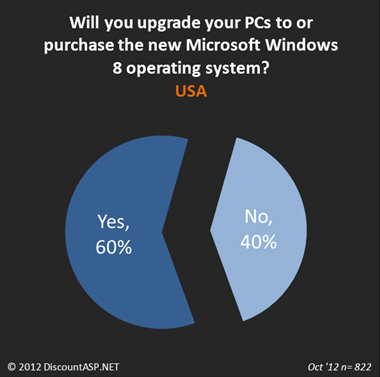 We also asked our customers which mobile phone they used and the customers who answered “yes” to wanting to purchase a Microsoft Surface were using the iPhone at 39% and Android at 41%.

From our previous post, we observed that among those that intended to upgrade to or purchase Windows 8 had a higher percentage of iPhone (47%) and Android (53%) adoption compared to those customers that wanted to purchase the Microsoft Surface. 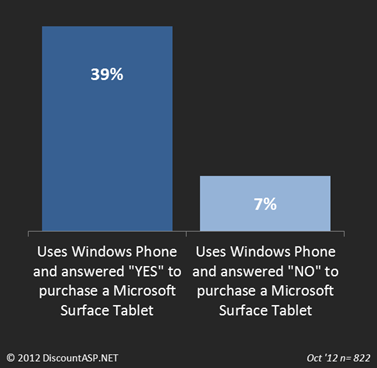 In summary, there is no doubt that our customers will continue to invest in Microsoft products.  With half of our customers interested in purchasing the new Microsoft Surface, this supports Microsoft’s claims that they have been overwhelmed with Surface pre-orders since last week.  Not to mention a Bill Gates video interview where he talks about his excitement over the new form factor has been posted.

We see that a large percentage of our customers who use the Windows Phone are also attracted to the Microsoft Surface which suggests one avenue for Microsoft to market the Surface. However the question remains how the new device will fare in attracting a new generation of users that may not necessarily use Microsoft products and who may already own an iPad or Android tablet.

I’m sure we will see a lot of Microsoft activities around building Windows 8 apps for a while. Windows 8 and Surface are critical products for Microsoft and we will continue to see how these products are being adopted by our customers.

One thought on “Will DiscountASP.NET users purchase a Microsoft Surface?”