A simple drawing can be effective to visually crystallize complex concepts into a single idea. You can check out a fun book by Dan Roam called “The Back of the Napkin: Solving Problems and Selling Ideas with Pictures” – all about the art of, well, napkin art.

When we were thinking about getting into the hosting business back in 2003, we knew that it was important to focus on a niche when starting a new business – but what niche? Considering that there were tens of thousands of hosting companies out there in a very competitive market, and that website hosting itself was becoming commoditized, and that there were already huge well established hosts with much deeper pockets and more resources than us (not to mention millions of customers), we were faced with the dilemma of figuring out what to focus on for our new hosting venture dream.

We spent time dissecting the hosting market from many different angles over and over to determine if there was any hosting niche with room for a new player or if there was a blue ocean (term taken from the book “Blue Ocean Strategy“) that we could sail into or if we should just forget the whole thing altogether and do something else.

The idea for DiscountASP.NET really gelled for us with a simple Venn diagram drawn on a napkin at a cafe meeting one day in early 2003. Although the original napkin is long lost, here is a recreation of the drawing: 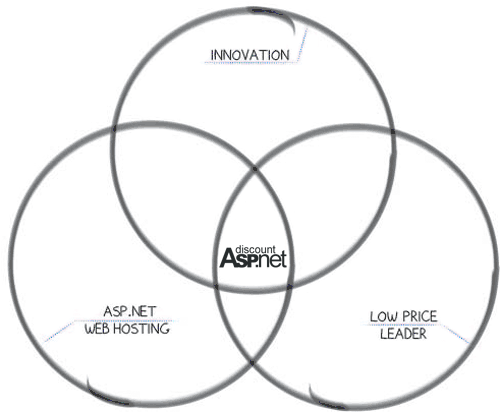 Once we made this drawing, we knew we had found our niche. Back then, we did not see any other host that occupied the intersection of the Venn diagram. Even though there were hosts that had Windows hosting in their portfolio and even though there were several Windows-only hosts out there, none of them led with a focus on ASP.NET – a new framework Microsoft had just released in 2002.  No host had yet bet on .NET and we could be the first host to go “all in.”

So inspired in part by a napkin drawing, we rolled the dice and launched DiscountASP.NET in 2003, and now we’ve been at it for a decade!

6 thoughts on “DiscountASP.NET Was Born on a Napkin”