Earlier this week I went to Phoenix for their annual AZgroups Day of .NET event which DiscountASP.NET has sponsored for many years. In fact, it was noted at the event that we are one of the longest running sponsors. My, how time does fly…

The running joke was that the event should be renamed, “Day of Scott,” since you have Scott Guthrie, Scott Hanselman, and uber-organizer Scott Cate of EventDay leading the organization of the event, which was held at the awesome facilities of the Scottsdale Center for the Arts.

While we haven’t attended every single year, I made an effort to go out this year and had a great time meeting with customers and talking to the developer community. And also catching up with people like Dave Campbell of Wynapse.com and WindowsDevNews, and Joseph Guadagno the current president of INETA, and meeting people from other sponsors like Pluralsight, Neudesic, and Axosoft.

As a sponsor, I was given some time to speak to the audience and I was the first speaker up in the morning before Scott Guthrie’s presentation. One of the audience members took a picture from the rafters – that small figure is me with Scott Cate on stage. 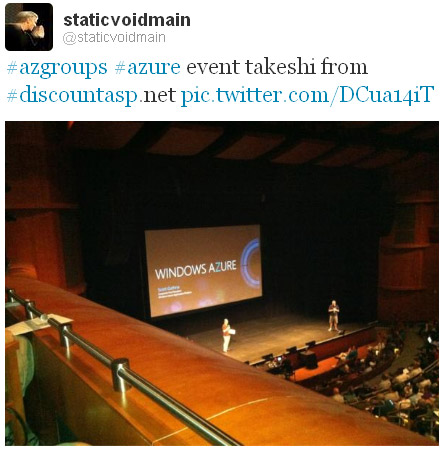 Here’s a view from below while I was waiting to go on stage – this was a large crowd! 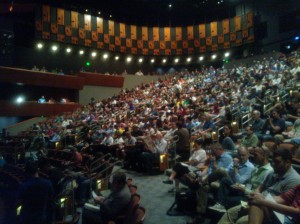 All in all it was a great time. Thank you and props to Scott Cate and crew for putting on the event and thanks to the developer community for taking the time out of their busy schedules to come to the event. We look forward to next the one.
Follow @takeshiDASP

One thought on “Thank You to AZGroups and the AZ Dev Community!”