This was a very secretive and big conference for Microsoft. The conference was important because it was the first deep dive unveiling of Windows 8 to the developer community. And Microsoft  also had to provide a roadmap on their future direction – a question that has been on the minds of all developers leading into the conference. 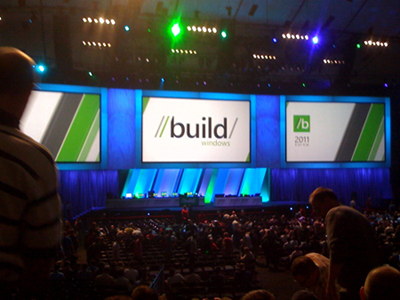 Prior to the conference, there were many speculations about the death of Silverlight or .NET or…or…or… But similar to the past DOS to Windows transition where both DOS and Windows coexisted, Microsoft is moving to a “metro” world targeted mainly to consumers but still making sure that the desktop as we know it is fully supported. So at least for the foreseeable future, all the skills that developers have invested in will still remain relevant.

Though much of the conference sessions was about building metro-style apps, Silverlight 5 is still coming, .NET 4.5 is coming, and MVC 4 is coming – and we are looking forward to hosting all of these new technologies.

Microsoft’s vision is one OS to rule them all – form factors that is. With the declining sales of PCs and the rapid adoption of smartphones all over the world and the rising sales of the tablet form factor, Microsoft needs to address the changing and evolving technology market. And if you think about it, the platform on which innovation is happening today is the mobile form factors – where Microsoft has a smaller market share. The “re-imagined” Windows 8 Metro UI is designed to address the mobile form factor market and was designed around touch.

So what does this mean for developers? With the continued support of the desktop, Microsoft has not really taken something away but has added a new metro platform to develop on. The challenge is for developers to decide whether to invest in developing metro apps or not and whether to solely focus on metro apps or desktop apps or do both.  When the decision on metro vs. desktop platform is made, then there is the next challenge of deciding which technologies to use in order to build those apps. Because the metro and desktop platforms may use some similar technologies, but they will not be the same. For the web developer, they will need to decide if their web applications are to function in the Metro IE and/or the desktop browser. The Metro IE browser will not support flash or Silverlight plugins. And finally, if the developer decides on making metro apps, then the question is, when do you start?

At the conference, Microsoft released the following Windows 8 Platform and Tools architecture block diagram to highlight the two platforms within Windows 8. 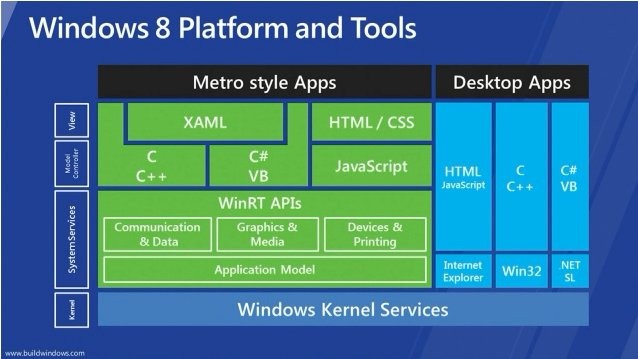 Let’s add some additional data points to the equation. Microsoft is launching an application marketplace within the metro UI which can potentially be a huge and lucrative opportunity for developers to have access to ALL users of Windows 8 – but, of course, the opportunity depends on the adoption rate of Windows 8. There will probably be first mover advantage to developers that have metro apps ready in the early phase. During the conference, Microsoft also highlighted the current install base of Windows 7 at around 450 million – which is a huge base of potential upgrades to Windows 8 – but the keyword that developers need to bet on is “potential.” Finally, the release date of Windows 8 was not announced so it is still unknown when the new OS will launch.

Developers have some decisions to make and you’ll find varying opinions out in the blogosphere. Our friends at Telerik came up with this decision flow chart on when you may want to use the metro-style apps. The “marketecture” block diagram above has also been the subject of much discussion and has been redrawn by others.

At the conference, Microsoft had sessions talking about the Windows 8 Server too. We are looking forward to deep diving into this new product to see how we can offer hosting services. It’s way too early to provide any information about future hosting on Windows 8 but you can be sure that we are looking into it.

At one of the non-metro talks, Microsoft launched WebMatrix v2 beta. We were involved in testing of the beta prior to the conference and it was announced at the session that we are providing a Free WebMatrix v2 beta hosting sandbox for the developer community in our DiscountASP.NET Labs. So check it out.

And of course, Microsoft had their Oprah moment with the Windows 8 Tablet giveaway. Everybody was super-excited and many were patient to wait through huge lines to be the first to get their hands on one. It’s smart for Microsoft to not just release the Windows 8 preview as a download but to actually get a working mobile form factor into the hands of their developer community. I talked a lot of developers and they were excited about the tablet and the new metro app possibilities. 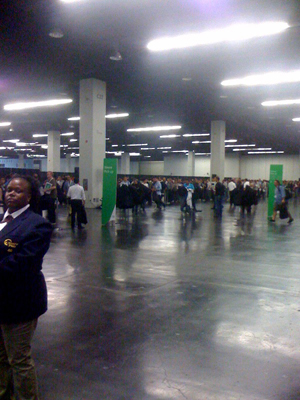 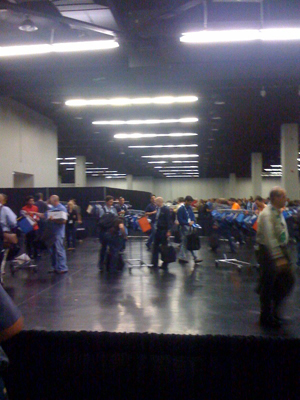 And if you were wondering, yup, I got one too 🙂 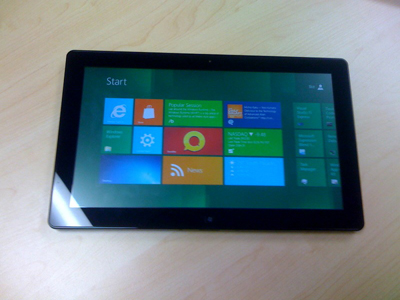 We will see how Microosft executes on their vision. Their success will hinge on adoption of Windows 8 and getting developers on board to create the applications that will usher in the next-generation OS.

I don’t have a crystal ball to foretell the future, but I can tell you this – I’ve taken the Windows 8 tablet to some cafes and restaurants and the patrons and wait staff have all been very curious and asked a lot of questions about it. One cafe owner asked me to come back with the tablet in the future so he can play with it more. I’ve shown the tablet to family and friends who are iPad users and they all thought the Windows 8 tablet was really cool. You can tell by the look in people’s eyes that they are all genuinely intrigued and can imagine the possibilities of what may come.  If Microsoft can get the OS out fast and capitalize on this sentiment, it could be big.

As for the future with Windows 8, I expect some wins and some failures but there is one thing you can count on – and that is that all of us at DiscountASP.NET will continue to innovate and evolve our hosting business in this ever-changing landscape.

We are “all in” when it comes to hosting solutions for the Microsoft developer.

One thought on “BUILD Conference: Developers Have Decisions to Make”