Yesterday was Google’s 13th anniversary. Now, we’re primarily a Microsoft shop here, so there are a lot of Bing advocates wandering the halls, but even the most ardent Microsoftie has to acknowledge the pioneering work by Google. Bing was built on what Google created. Might someone else have done it if those wacky Google guys hadn’t come along? Maybe. But they didn’t. Might Microsoft have come up with something like Bing or Google on their own eventually? Maybe.

In any event, it seems quaint in retrospect, the sites we used for our searches on the pre-Google web. Alta Vista was the choice of geeks and shut-ins in the days just prior to Google, but its results were often baffling. As if a trained ape was sitting behind the index page of the site providing different answers every time you searched for the same thing. And does anyone remember Yahoo’s static categorized listings? HotBot? Dogpile? You certainly could find things, even if it was almost accidentally. But Google changed all that with a deeper search and more relevant results. 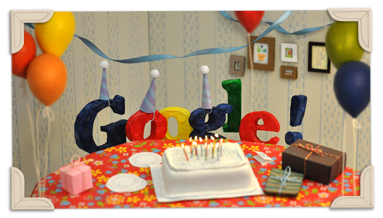 Google came along at an interesting time in the early history of the web. While I just mocked Yahoo’s categorized listings, there was a time when you actually could index the existing web sites that way. It was still small enough to encompass in a framework like that. There were even magazines that reviewed web sites, something that seems odd and unnecessary now. But those were different times, and it was a lot more surprising to stumble on something amazing, something that you’d never seen before. Now it seems as if the amazing is routine.

Which is as it should be, I suppose. Google is such an integral part of existence these days (many people reading this probably have it in their pockets right now) that it’s hard to imagine what we would do without it. But I do miss the underground feel so much of the web had in the early days. It was like a secret world, and most of the people that you walked past on the street had no idea it even existed.

So here’s to 13 years of Google organizing the oceans of data that make up today’s web. I’ll see you 13 years from now, when we’ll probably be searching on the insides of our eyelids somehow…