We get a lot of awards around here. Some of them are prestigious and coveted, some are really cool, and a few of them, admittedly, seem to be handed out to anyone with a web site and a mailing address.

But we welcome and appreciate all of them, we really do. In fact, we bust our asses to earn some of them, and as a result of doing so, wind up providing you with the best web hosting money can buy. I know I’ve been saying that a lot lately, but it’s because I really believe it.

We’re also members of the Microsoft Visual Studio Industry Partner (VSIP) program, which gets us in on early previews of new products and gives us a direct feedback channel which allows us to influence development. And also, apparently, qualifies us to receive awards: 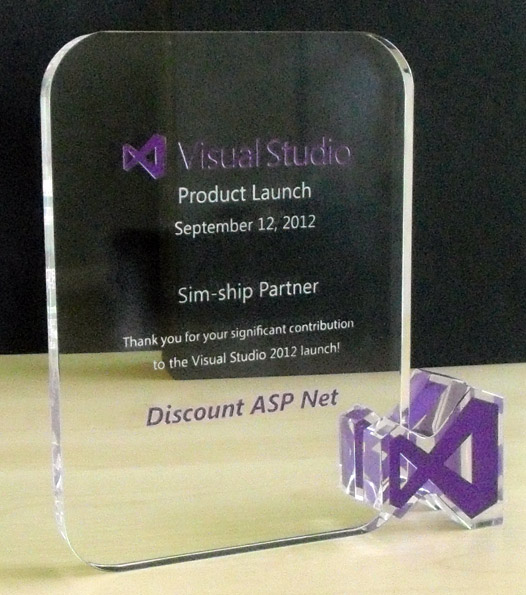 Okay, so that’s clearly more of a “thank you” than an actual award, but it’s shaped like an award, and it’s heavy and made of etched glass, just like many legitimate awards.

And as I said, we do love to receive awards. We’re human, after all. They make us feel good about what we do around here all day. When we walk into the office we’re confronted with walls full of them, and they make us smile. Not smug, self-satisfied smiles, more like yeah, we’re that awesome smiles.

This one has been added to a cabinet here in our lobby that is overflowing with all sorts of heavy glass kudos. You’re welcome to come and see it, have your picture taken with it and say hello to us next time you’re in Pasadena.

This particular award-type-plaque-thing recognizes us a “Sim-ship Partner.” I had to look that up. In case you didn’t know, sim-ship means simultaneous shipment. I assume that a lot of these VSIP developers and tool builders:

had a little more input into the product than we did.

As the only host on that list, our role is basically to try these things out and tell Microsoft where they are broken as far as a commercial hosting environment is concerned. Which we do out of our own self-interest and self-preservation, but it benefits everyone out there who uses Microsoft web development technologies.

Even though Microsoft isn’t as cozy with web hosts as they once were, it’s nice of them to send us this engraved piece of glass. Though it probably took me longer to get a readable picture of it than it did for someone in building B1400 up there in Redmond to order and ship it. Still, we appreciate the sentiment and the effort, and naturally it looks good on our shelves.