It’s hard to believe that DiscountASP.NET has been around for over a decade. From the start we’ve been laser focused on meeting the hosting needs of Microsoft developers and I think you would agree that we haven’t strayed from our original mission.

Every year I look back at the end of the year and talk about the top ten things we accomplished during the year – 2012 for example.  In this series, I’m going to look back on our ten years in business and talk about innovations and firsts that we introduced into the hosting world.

In Part I, I look back specifically on our business launch. 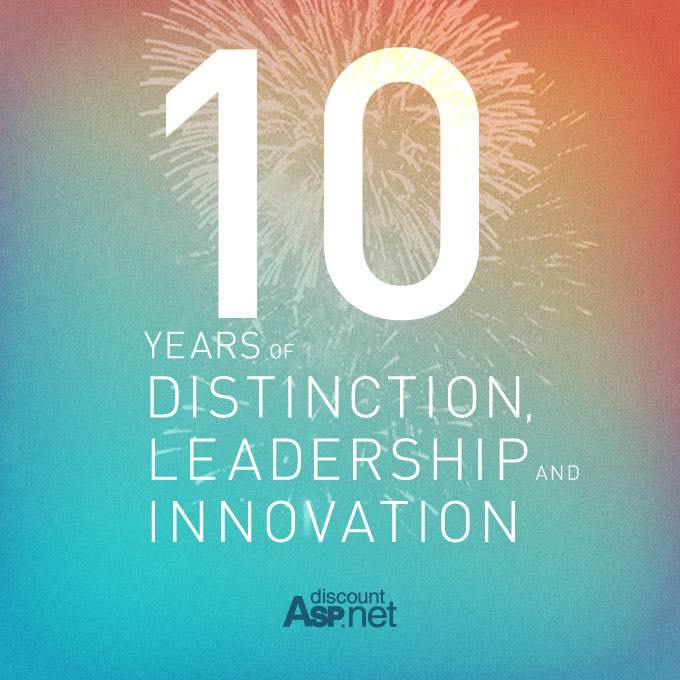 This is not a technical innovation but more about a new business focus. I published a prior blog post on the napkin drawing that was our “aha-moment” for our business plan. When we entered the hosting market back in 2003 there were many bigger hosting companies that offered Windows hosting as part of their portfolio and there were several Windows-only hosting providers. But we saw no one that focused on Microsoft .NET, a new framework that was introduced the year before. So we were the first host to go all-in for .NET and we led with “ASP.NET Hosting” as our core message. In doing so we showed that there were hosting niches that were still unaddressed.

If we were going to claim the space of ASP.NET Hosting, we thought it would be important to have a .NET-powered control panel. The other control panels out there at the time were PHP or ASP powered canned solutions. And those hosts with proprietary control panels used legacy technologies. So we built our own shared hosting control panel using .NET – the first one in the industry as far as I know. In a previous Art of Hosting blog post I talked about some of the decisions a host needs to make regarding their control panel.

We launched our hosting business in 2003 and this was not by accident. We specifically targeted Windows 2003 as our entry point platform. There were no off-the-shelf hosting automation systems for Windows 2003, so we built our own. When Microsoft officially launched Windows 2003 – we launched that same week and we were the first shared host to offer Windows 2003 hosting.

So how did we build an entire hosting automation system for an OS that was not in the market yet? We were able to accomplish what we did because at that time Microsoft transitioned to a more open development stance and made betas available for Windows 2003 to the public.

However, by hosting every site in its own isolated application pools, there was real business impact. We could not host as many sites on the server as compared to hosting sites all within a shared application pool. We decided to focus on providing a more reliable hosting platform rather than focus on cramming more sites onto the web servers.

A benefit of hosting sites in isolated application pools is the ability to support full trust mode. If a host uses shared application pools in a shared hosting environment, they have to run in medium trust mode or else there will be serious security issues. Because users could bin deploy controls and run apps (e.g. CMS apps) that require full trust at DiscountASP.NET, we offered a more flexible hosting platform for developers.

In the next installment, I’ll talk about some of the tools we’ve launched in the control panel.

One thought on “Ten Years of Innovation and Firsts: Part I”