We have a lot of meetings here in the office. My own calendar has five weekly meetings and two biweekly meetings, along with our monthly company meeting. Add to that unscheduled meetings, people yanking me out of the hallways or strolling in to my office at random times, and it all adds up to a lot of what they call face time with my co-workers.

The thing is, all of the meetings are beneficial. I know, you may find that hard to believe, but it’s true. We get a lot done around here. The communication is open and the hierarchy is very flat. I don’t need an appointment to see anyone, and they don’t need an appointment to see me. I credit a lot of that productivity to our meetings, but without an open and creative corporate culture behind those meetings, all you’ve got is a lot of killed time.

One management consulting firm report that I read said that their clients spent 50% of their time in meetings (yikes!) and felt that half of that time was wasted. Essentially a quarter of their work day, down the drain. The idea that people feel half of the time they spend in meetings is wasted doesn’t surprise me. If the meetings are poorly managed, that time is wasted. 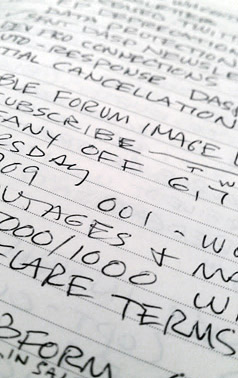 At the first hosting company I worked for, we had a weekly meeting of the department heads. But because the owner of the company was somewhat of an inflexible dude, not a lot got accomplished. After a few months some of us started to call them “planning to plan” meetings, and no one looked forward to them. We didn’t expect anything to come of them, and nothing much ever did. Wasted time.

Later, at another hosting company, I argued for some time that we needed a similar weekly meeting with the department heads and the owner (I guess I am an optimist and always hold out hope for an improved result). Finally the owner of the company capitulated, and the meetings began as very open affairs where everyone was kept up to date as to what other departments were doing, and anyone could contribute ideas. Everything was great. You know, for a while.

Then we began to notice that our ideas, after they were accepted and applauded, were rarely acted upon. The owner was really only placating us by holding the meetings. He didn’t actually see them (or our ideas, apparently) as having any value. So what do you think happened? The meetings dried up and became short, tense once-around-the-room exercises in boredom and frustration. Which wasn’t surprising. Why would anyone make a suggestion or propose an idea when they know it’s never going to be put into action? Wasted time.

Now, as if to demonstrate that meetings are unnecessary whether they are good or bad, a friend of mine works for a relatively large independent hosting company that doesn’t even have an office. The executives and managers get together once or twice a year in person, but the rest of the time they are all working from their homes around the world. They’ve made that work for them, but I don’t know how they do it! I have to say that it would be very frustrating to lose the ability to walk into Frank or Takeshi’s office, or to be able to ambush a system administrator – or anyone else – in the hall and take care of an issue right then and there. 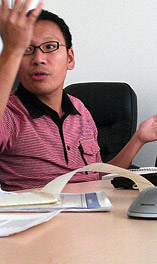 Of course, like the people at my friend’s company, a lot of the communication here at DiscountASP.NET is done through email and IM as well, even though we’re all within a few hundred feet of each other at any given time of the day. But I really believe that the human interaction is a very important component in being part of an effective team. Seeing someone’s face gives you a lot more input than simply reading their words, and hearing them passionately propose or argue against an idea is much more likely to sway you one way or the other.

When you communicate solely by text, less communicative people on the team will be left out of the conversation and the decision making process. But if those same, less communicative people are sitting in the room right there in front of you, you can’t forget they are there, and the odds are a lot better that you’ll be able to squeeze some input out of them. Even if they say nothing, their facial expressions and body language will usually telegraph their opinions, whether they realize it or not.

Regardless of the odd exception here or there, I will always maintain that good face-to-face meetings are an essential part of any effective operation. When the lines of communication are open between departments and people, you’ll see productivity, efficiency and most importantly – the spark that makes for a great company – thrive. If those lines are closed, the same things can quickly go right out the window. And once they are gone, it can be very difficult to bring them back. When everyone knows what everyone else is up to, and everyone’s opinions are truly valued, you wind up with a cohesive and focused crew with common goals and real-world input into every aspect of how the company works. That has to be a win/win situation in anyone’s book.

One thought on “This will only take a minute…”