We sponsor a lot of Code Camps around the country, and we like to visit as many as we can. Usually for the Los Angeles area camps we will set up a table and talk to people who are attending and give away some DiscountASP.NET branded stuff.

At camps in the past, people were always saying to us, “You guys should do a session!” so in October of last year we did our first two sessions, “Getting started with TFS,” and “Q & A with a hosting provider.” Both sessions were well attended, and despite some technical problems with Joe’s TFS session, both were a success.

So for the Code Camp in Fullerton this past weekend we thought we would offer up the same Q & A session. At USC in October, we had filled up a small room with about 25 attendees. At Fullerton we were scheduled into a much larger room, and we packed in: 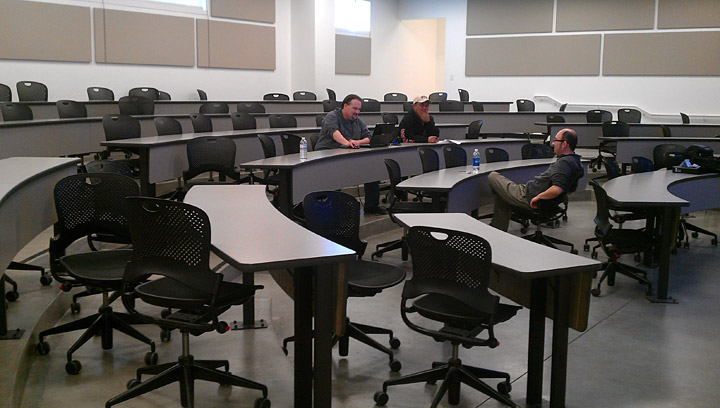 Actually, the people in that photo are all us, as the other three attendees had already left.

It was an interesting – and brief – session, as you might imagine. At one point shortly after we began, someone wandered in apparently looking for a quiet place to eat her lunch, but she soon left when it became clear that her Carl’s Jr. bag would be the loudest thing in the room. Another guy left without asking a question, and our lone active participant left after getting his two questions answered.

So it was a smashing success!

We weren’t too broken up about it, considering we were up against some very interesting sessions in the same time slot. It was actually pretty funny, and we hung around in the conference room for a while telling stories about other notable failures we’ve been involved in.

The concept of a Q & A might not be so great for something like a Code Camp anyway, considering the fact that we’re set up at a table all day where hundreds of people stop and ask us questions. No need to sit in a conference room for an hour and a half when you can get your questions answered in a few minutes, up close and personal.

Have we given up on presenting at Code Camps? No way. We have some ideas for sessions that should be a bit more compelling than a Q & A. Hopefully you’ll sit in on one of them soon.

9 thoughts on “The sound of no hands clapping”