As you probably know, for the past decade we have been sponsoring, championing, visiting, & speaking at Conferences, Code Camps,  and User Groups around the country. Some are large like the upcoming Dallas Day of Dot Net, and some consist of just a small group of passionate people.

Yesterday, Calvin Wong posted this about our most recent trip where I was presenting on the topic of ASP.NET SignalR. Every time I return to the office from one of these trips, I can’t help but think about how much the developers that don’t attend these events are missing out on.

Since the early days of microcomputers, User Groups have played a huge role in our industry. They are a fantastic environment to learn new things, meet like minded people, exchange and promote new ideas, and see what direction the local community is moving in. Now I know I’m not telling you anything you don’t already know. I’m just hoping to convince some of you to start attending.

Oh – and as for Calvin’s claims about my driving…you can clearly see from the video there was no zig-zagging or any other such Dukes-of-Hazzard type maneuvers going on!

What you can also see around the 2 minute mark is Calvin framing the Sony building where one of the talks was being held. Once he found his framing, he shut off the camera and tried to convince me to jump out the window and parachute down. He rambled on about his “Vision” and the YouTube course on “Getting Started with Pyrotechnics” that he just finished.

Then he showed me the storyboard he was working on: 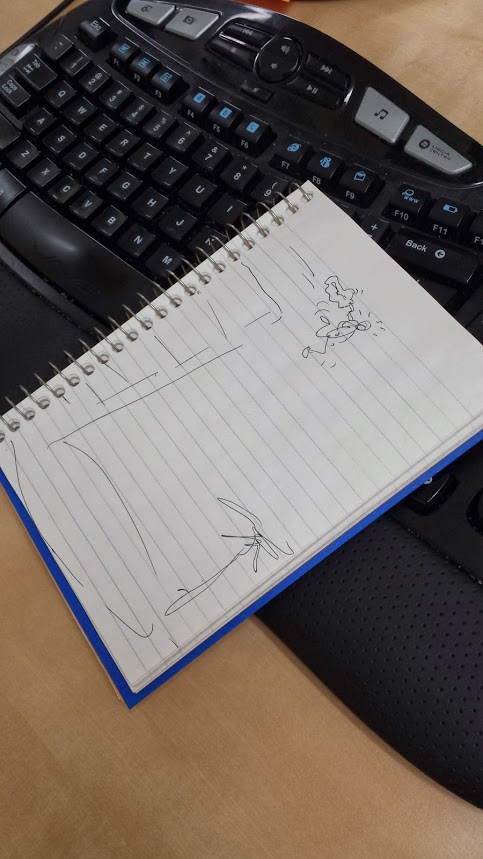