I’m interested in keeping track of the trends in Cloud Computing and I always look forward to checking out the Gartner Hype Cycle when they release an update every year. Previously, I’ve done some posts around the Hype Cycle and trends in the hosting and Cloud computing space. If you are unfamiliar with the Hype Cycle, here’s my introductory post.

What was really interesting last year was that Gartner felt it was time for “The Cloud” to get its own Hype Cycle as the Cloud Computing enterprise had splintered into so many subcategories and niches.

So what’s happened since last year? 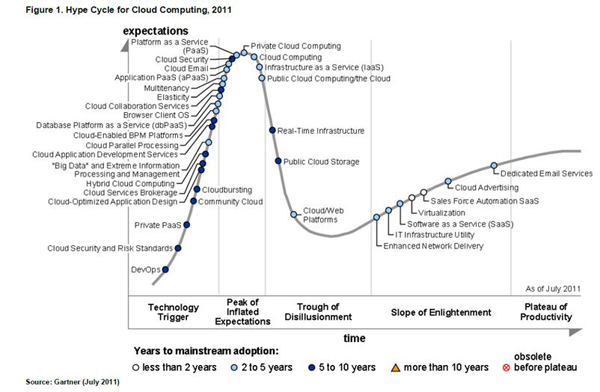 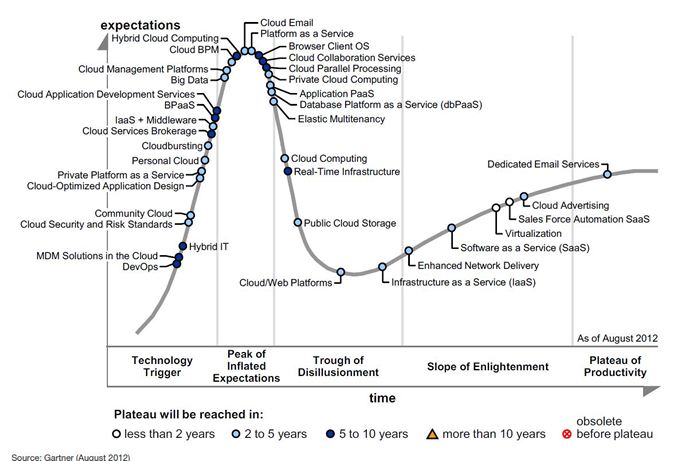 Let’s first take a look at the typical categories of the Cloud enterprise – SaaS, PaaS, and IaaS. Gartner views Software as a Service to be maturing, but slowly, as in 2011, SaaS was in the Slope of Enlightenment and in 2012 remained pretty much in the same position.

Platform as a Service on the other hand was almost at the Peak of Inflated Expectations in 2011 and reached the peak in 2012. PaaS will be entering the Trough of Disillusionment in 2013.

The biggest movement was with Infrastructure as a Service. In 2011, IaaS had just made it over the Peak, and in 2012 IaaS passed through the bottom of the Trough and is on the upswing of the Slope. IaaS appears to be maturing and is on its way to the Plateau of Productivity.

It’s interesting that Amazon made the strategic decision to be a first mover in the IaaS business and weather the storm of Inflated Expectations and Disillusionment, while other players like Microsoft and Oracle waited and just recently announced their entry into the IaaS space.

It’s too much to try to see what happened to each of the 30 or so subcategories and niches of the new Cloud hype curve, so let me select just a handful to look at.

In many magazines about software development, I see articles discussing DevOps – the blurring of the lines between Development and Operations driven by the evolution of technologies and tools. In 2011, we see DevOps appear at the start of the technology trigger and in 2012 it’s only reached about a quarter of the way up.

Since we are in the business of TFS Hosting, one category that caught my eye was Cloud Application Development Services, as our service is a source control and ALM solution that resides on hosted servers which aids application development. In 2011, this category was about half way up the technology trigger and in 2012 it made it to about 2/3 of the upward slope. We’ll keep an eye out for how this category trends.

All the categories are moving along the hype cycle. The one category where I noticed the biggest change was IaaS. I think the value here is to look at the categories that are of interest to you and to compare how each are moving faster or slower according to Gartner’s opinion. This may impact the timing of when you want to make your investments in that category for your own business.