We recently attended the Silicon Valley Code Camp, and it was quite a weekend.

First things first, if you’re unfamiliar with the concept, Code Camps are intensive one or two day code and development conferences, centered around various regional development communities. If you live in a big city (and a lot of smaller cities), chances are there’s a Code Camp taking place at least once a year somewhere near you.

Here in Southern California, for example, we have the SoCal Code Camps, a series of three Code Camps that take place in Los Angeles, Fullerton and San Diego every year.

But the mother of all Code Camps is the Silicon Valley Code Camp. Based on the attendance figures they publish and the number of people we saw and spoke to, I would say it is easily three times the size of the largest SoCal Code Camp. 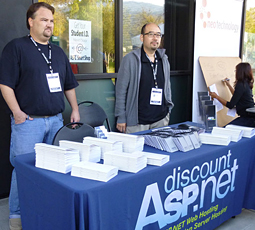 We sponsor dozens of Code Camps around the country, but typically we only show our faces at the SoCal Code Camps. This year though we decided to make the trek up to the bay area and meet and greet, as they say. Our hope was to do a session as well (we have done them at SoCal Code Camps), but the timing of the event didn’t sync with what we wanted to present, so we simply observed and talked to as many people as we could.

We met a lot of current DiscountASP.NET customers, which is always great. Apparently it’s great for some of our users as well, as one of them commented, “Oh, it’s good to see it’s not just one guy.” Not sure how one guy could work all of this, but there you go. At least we proved him wrong. I just hope he doesn’t think it’s only a three guy operation since only three of us were there.

Since Silicon Valley Code Camp is so big, a lot of bigger companies show up as well. Microsoft had a Windows 8 muscle car parked nearby, complete with its own security guard. We posted a lot of pictures, so you can see what was going on.

It might seem easy, standing behind a table and talking to people all day, and I suppose in the scheme of things, it is easy. Especially when you’re talking about something you love. And in the grand scheme of things, it beats digging a ditch, as my grandfather used to say.

But it is exhausting (if you do it right), I’m not going to lie. Near the end of the second day we started to get a little loopy. I’ll tell you about that in part two…

One thought on “Silicon Valley Code Camp – part one”