You may have noticed that a lot of web hosts are not particularly active on social media. Many don’t even have public-facing community forums. We’ve always had a forum because we believe they’re indispensable when it comes to making information and knowledge available, and as a place where people can help each other.

As far as social media is concerned though, we didn’t hop on that train right away. DiscountASP.NET started 3 years before Facebook and Twitter opened to the public, and 8 years before Google+ decided to do their thing.

But when those things came along, most businesses didn’t immediately take advantage of them, and we were no different. Eventually though, we made our way to Twitter, then Facebook. But it was when Google+ came along that we started to take a more active role in social media.

So we put a lot of resources into all three, with the expectation that we would get a dialog going with our users and the world at large. We did Google+ Hangouts, published new articles often, responded to every social media interaction.

That’s what all the pundits and social media experts were telling us we should do. They assured us that, “If you build it they will come,” so we built it and nurtured it and painted it nice colors and put up decorative lights. It was a great and glorious thing.

What we learned after committing those resources to social media was that the people who use web hosting services don’t much care about what we have to say outside of issues that are directly related to what we do. They don’t want to hang out with us. Well, on social media, anyway. Our blogs still get a lot of traffic and our forums continue to be used. But Twitter, Facebook, Google+? Not so much.

There are certainly a lot of you on Twitter and Facebook – and yes, some of you are even still on Google+ – but you’re not so interested in chit chatting with your web host on there.

Now, I have to tell you, we are an interesting bunch, but I can’t blame you for not being our pals. For not wanting to hang out and talk about motorcycles or vinyl LPs or gardening. Interacting with a company can feel a little…weird. Or one-sided in a lot of cases. Plus, you’ve got work to do. And so do we.

So we’re okay with not being your Facebook friends. But we have seen that you do expect to be able to use social media to find out what’s happening when you see a problem. So we’ve shifted our social media focus to providing notices about upcoming maintenance and alerting you to problems as they’re happening.

And as far as that goes – well, here’s my social media calendar for DiscountASP.NET for two weeks in October: 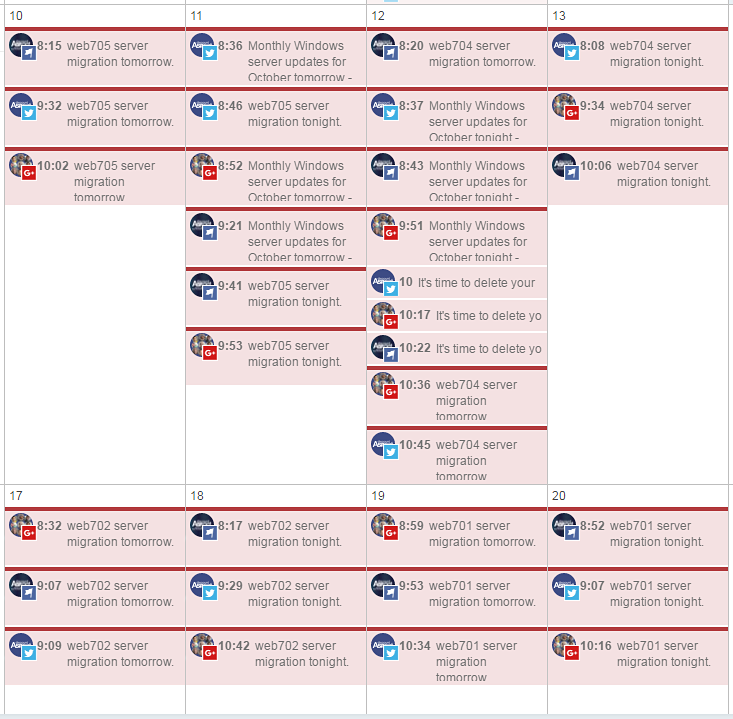 As you can see, it’s a lot of ground to cover. But you’ve let us know that’s what you want, so we’re happy to do it.

Those are just the scheduled things, the things we know are going to happen. The unscheduled activity is an entirely different kettle of gumbo, and it can be a bit frantic and crazy around here when something goes wrong and affects the entire network.

It’s crazy because we’re your favorite scrappy independent host, not a huge multinational conglomerate. Which means we don’t have a room full of people in front of computers here in the office, waiting patiently to answer your Facebook posts or Tweets. It’s usually just me and one or two members of the support staff, depending on what’s going on.

So if one of those big problems does happen, we’ll let you know on social media, but we’ll also usually point you to our forums (which are hosted outside or network) for more information, or to answer your questions.

That helps because we can give you updates and answer questions in one place, rather than three or six (or more). Imagine trying to answer every post on Facebook, Twitter and Google+ and work the helpdesks and forums for two brands when hundreds of people are posting and emailing. There’s just no way we can keep up on all of the social media sites at those times.

So if you post on Facebook when there is a problem that affects a large part of the network but you don’t get a response right away, it doesn’t mean we’re unaware of the problem, and we certainly aren’t ignoring you. We’re probably just, you know, busy.

The outage threads in the forums have traditionally been locked, but a while back we opened them up so you can talk to us in there. So next time you feel like something may be going haywire, check for us in the forums: DiscountASP.NET, Everleap.

Luckily problems that affect everyone are very rare, so we’re not often in a place where we’re overwhelmed answering your queries. If it’s a localized problem, something affecting one server or part of a server, we’ll always do everything we can to respond to you wherever you happen to be posting.

When we saw the writing on the social media wall we didn’t just fold up our tents and go back to the way things used to be. We adapted, and we continue to adapt every day. And I hope we’re adapting in a way that’s working for you. If we’re not – well you know where to find us.