As we enter a new fiscal year, Microsoft announced that the Windows Store surpassed 100,000 apps. This announcement came on the heels of the Microsoft //BUILD conference in San Francisco and about eight months after the official launch of the Windows 8 operating system.

While competitors including Google Play and Apple App Store are closer to 1 million apps, the latest Microsoft app growth trend is a generally positive one for Microsoft developers.

In a subsequent question, we asked how many web and mobile apps have they developed. For this post, I will only look at the 47% of U.S.-based customers with mobile application development experience and see how many apps they have developed. 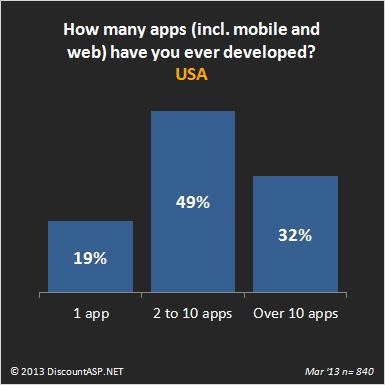 So to recap, we are seeing a large percentage of our customers have experience developing mobile apps and those that make mobile apps are developing multiple apps. That’s great! That is exactly why we chose to develop and launch Snapp, our .NET Platform as a Service.

Curious about Snapp? You can sign up for our free beta.