I have been in the online marketing trenches since 2000, having advertised web hosting services on a plethora of search engines such as Alta Vista, Lycos, Excite, GoTo/Overture, Sprinks, 7Search, Mamma, Yahoo, MSN/Bing, and obviously the mother of all search engines, Google. 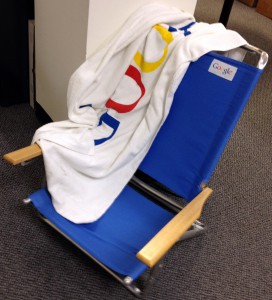 Heck, I was even a beta tester of AdWords, which is one reason why I’ve received some cool Google swag, like my Google beach chair and towel that sits firmly in the marketing office.

but never had I, nor anyone else from DiscountASP.NET, been invited to the Google campus…that is until now!  That’s right, after years of blood, sweat and tears (a.k.a. Google advertising), Google finally extended an olive branch and invited me, Derek Kadota (Online Marketing Manager) and Tony Guido (Research Manager) to Mountain View, California to visit Google.

Upon arriving at the Google campus, I wasn’t overly impressed.  The campus wasn’t as big as I imagined.  Externally, the buildings weren’t anything special, nor were they even very big.  In fact, I think the tallest building was four stories.  It wasn’t until our AdWords rep, AK, met us in the lobby and directed us to the Google bowling alley that I became awestruck.

Construction for the bowling alley, located In the Sales/Ad Words building was recently completed; this where the sales and AdWords teams sometimes have meetings and presumably happy hours as the bowling alley comes equipped with DJ equipment.  This was my first time seeing a bowling alley inside a corporate office so my intrigue grew.  I thought to myself, “Ok, all the cool stuff is hidden from plain view.  What other cool perks do Google employees have available to them?”

After the bowling alley, we were then taken to the Google cafeteria (there are tons of cafeterias on the Google campus) where many employees were enjoying breakfast, buffet style.  People just grabbed a plate and tray and loaded up on food.  Not having eaten that morning, I jumped at the chance and had me some scrambled eggs, OJ and fruit.

While eating, this definitely didn’t feel like a corporate enterprise with a market cap of almost $200 billion but more like a college campus.  Maybe it was because most employees looked so young, but Google definitely has a college feel.  At breakfast there were people sitting alone with their laptops, almost as if they were cramming for an exam, and loud groups talking and laughing, clearly not discussing work.

When breakfast was over, AK introduced us to the rest of the Google team that helps manage our account. I won’t discuss the details of our meetings (I know you competitors are reading our blog!) but suffice it to say, Google has a ton of stuff that we will be testing in the future.

When our meeting was over, we grabbed a shuttle (yes Google has shuttles to take people around the campus) to the main part of campus.  It was in the main part of campus that we saw the really cool stuff.  First AK showed us yet another cafeteria, and who do we see perusing the place? None other than the “You’re so money,” wedding crashing actor himself, Vince Vaughn.  Rumor has it that he and Owen Wilson are going to film a movie about the life of a Google salesman so Vaughn was getting the grand tour (Owen Wilson was not there). 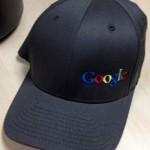 Our tour continued to the Google store which looked more like a college campus bookstore.   You can buy Google shirts, hats, jackets, pens, mouse pads, and a bunch of other Google stuff.  Derek even bought himself a Google hat, but he missed out on the 10% discount that Google employees get. We also walked by the massage area where employees could pay $30 for an hour-long massage.

For lunch, we went to the cafeteria on the main part of campus, which is different than the breakfast cafeteria because of the various types of food available.  They have Italian, American, Asian, Vegan, Indian, Mexican – all buffet style – available to all employees at no cost (breakfast was free as well).  I’d also like to add that on every floor we visited there were free snacks to munch on and free beverages.

AK joked that similar to college where you gain the “Freshman 15,” at Google you gain the “Google 15.”  Google knows that well-fed employees are happy employees.  Google does provide a healthy food option, which is where Derek and I picked up a strawberry smoothie.  Next to the cafeteria is the Google fitness center, where there were a ton of employees lifting weights and running on treadmills. And rightfully so – the amount of food these people have access to could feed a third world country.

There are even personal trainers on site that employees can use (though not for free).  After our tour, we grabbed our food and ate our lunch outside on the quad while watching some employees play volleyball.

The Google campus is obviously set up so the employees don’t need to leave.  There are a ton of food options.  Not only is breakfast and lunch served for free, but dinner is also served free.  As I mentioned, there is a gym, massages are available and there is even a Laundromat.  I think the only thing missing is a supermarket and housing.  I wouldn’t be too shocked if campus housing isn’t too far away. 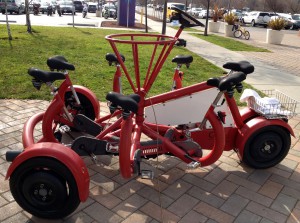 The highlight and most unique part of our Google trip had to be the bike ride we took around campus.  There are tons of Google bikes on the campus that people can just grab and ride. Google even has “conference bikes” that teams use (Tony calls this the Octopus Bike).  As AK explained, Google teams use the conference bike to build camaraderie so they can learn to work together.

With the conference bike, the leader of the team sits in the middle and not only steers but is also the central peddler. Those on the outside also pedal but because the bike is a fixed gear, the leader in the middle is the main peddler. 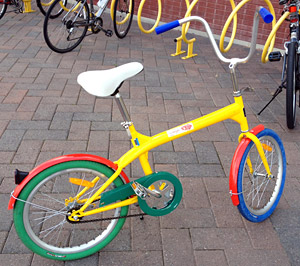 In theory, this sounds like a fun way of team building, but if you think about it, Google could lose an entire group, or a Google advertiser could lose their account team if something happened.  Not good!

After lunch there were no shuttles available to take us back to the Sales/AdWords building, so we decided to be brave and bike back.  Our bike ride was a brisk 10 minute trip, but I have to be honest, the Google bikes aren’t necessarily built for speed racing.

I’m not the world’s greatest bicyclist but I made it one piece and wasn’t too tired.  Derek, on the other hand, struggled the last part of the ride and said “I was feeling it on the last incline.”  I don’t know which route he took, but I didn’t feel much of an incline.  Unfortunately, we never got to ride a conference bike. 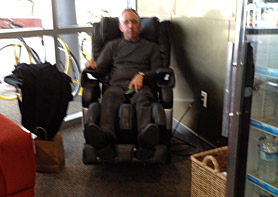 After we made it safely back to the Sales/AdWorlds building, we put an end to our day by visiting the Google arcade where they have tons of oldies but goodies such as Frogger, Ms. PacMan and the original 1985 classic, Gauntlet, all rigged so no quarters are necessary.

I’d just like to add that Merlin the Wizard sucks.  He is slow and is always the first one to die.  It wasn’t until I was the Valkyrie that my Gauntlet abilities came back to me and I kicked ass.  After our Gauntlet session, Tony decided to relax in the Google massage chair.