Takeshi wrote about our take on the prevailing wisdom at HostingCon regarding providing services to “niche” markets, and in this article I would like to add a bit to that and talk about where we all fit in the scheme of things.

A niche, in business terms, is a small, distinct group of consumers. The point being made at HostingCon was that traditional shared hosting (as DiscountASP.NET does) has become a niche market, while businesses move away from it and toward the fabulous, nebulous cloud.

One way to look at this is using the “long tail” (or for the mathematicians out there, the power law) relationship between the height of the traditional shared hosting industry, and the dire predictions of many of the HostingCon speakers. The illustration below demonstrates the “long tail,” showing the height of the adoption of a given technology on the left, and it’s decrease and potential “flattening out” on the right. 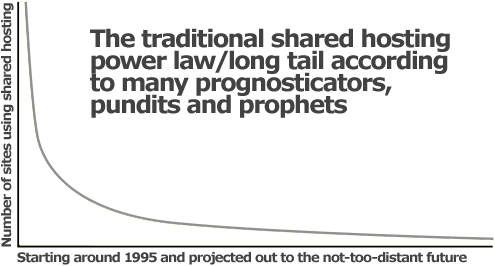 It’s an accurate descriptor for a lot of things, and especially for a lot of technological and web-related things, which is why it has been used so often over the past few years to demonstrate hundreds of markets. And as far as the general message being put forth by many of the HostingCon speakers, you could certainly use the long tail to graph traditional shared hosting adoption.

While businesses and individuals may currently be gravitating to cloud services, the underlying technology is rarely much different from that in the traditional shared hosting world. So it could be argued that the graph more accurately describes the use of the term “shared hosting,” than it does any actual technological shift.

As far as the overwhelming majority of web sites are concerned, you still need the same technology that you’ve always needed; web servers, database servers, email and file servers. Whether you are running your site from a dedicated server with every service installed on the same box, or hosting it in someone’s “cloud,” those servers are still at the heart of what drives your site, and they always will be. Okay, I take that back, one day perhaps web sites with live on tiny bits of plasma cell memory and we’ll swallow them like M&Ms. But until then, you’re going to need a web server. And if you really look at that underlying technology, you can’t help but take issue with the conclusions many people seem to be drawing these days.

But let’s say for the sake of argument that the long tail does accurately plot traditional shared hosting as a technology.

Microsoft has made it clear that their goal is to increase their share of the web technologies pie, through continual improvement to existing products like IIS, SQL and ASP.NET, and also through the development of newer technologies like Silverlight, WebMatrix and many other tools. They are also making their move into “cloud” services like Azure and a number of upcoming products and services. This may be a bone of contention, but, again, for the sake of argument, let’s group those technologies together under the “shared hosting” banner and see what Microsoft is working toward: 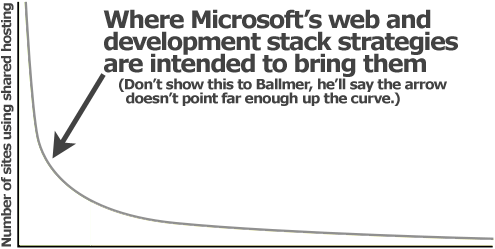 Microsoft’s plans overall are not necessarily targeted to the .NET developer so much as to business and general use. You can’t move into the mass-market by focusing on a niche, naturally, so that’s no surprise. That doesn’t mean they will be turning their backs on developers, that’s not going to happen. But the fact is, the developer is a singular breed, so the developer will always remain a niche, regardless of how much market penetration Microsoft’s technologies can achieve.

But to bring this back around to where we started, the anti-niche, wrong-end-of-the-long-tail line of thinking doesn’t take into consideration is that the developers who use all of these specialized applications and technologies require a niche in order to survive. They live in the niche, and you could certainly argue that they never were and never will be part of the high side of the power law distribution, that development will never be a mass-market, commodified service. I’ve provided a handy graph for that as well: 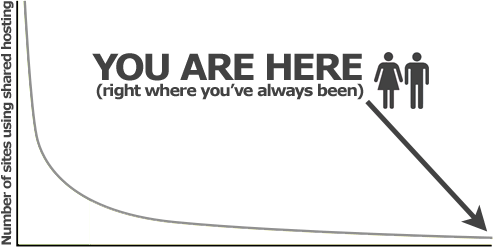 Which is all to say that abandoning a niche in favor of a mass-market product or service, from a provider’s standpoint, is not necessarily the be-all-and-end-all for everyone. It certainly is not for us. One size does not fit all, which you likely know all to well if you’re reading this. You are not the mass-market.

And really, why would you want to be?

2 thoughts on “Niches and long tails”

Leave a Reply to The Stand Up Comedy Center Cancel reply